It has been a while since I have taken some care of my tool to manage my GoPro footage with but it has gotten some attention so I could not just abandon it without losing my face so here we are...

When I first noticed, without much surprise, that there is no official GoPro desktop client for Linux, I wrote a bash script to automatically rename the files. Second step was converting this into a python script with a simple text based menu. In a weak moment of delusions of grandeur I decided to dive into GUI programming and use this application as my personal guinea pig.

First things first: the result of my efforts can be downloaded from the Git repository:

If you have cloned the repo sometime in the past and haven't altered anything I recommend to delete and clone again because there may be conflicts caused by a force push because I cannot git.

First things first: we have an icon. This is my way of coping with pedantry and an attempt to keep up the illusion of competence. I found it at The Noun Project.

The application now runs as generic Gtk.Application which includes

Since v0.3 there is a second main application window available with media data information and a preview widget realized with GStreamer.

These two windows are now merged into one providing a StackSwitcher to switch between these alternative views. This now is the default application window.

Not convinced to drop the "single view" windows I decided to keep them for now. You can launch the application using by executing the run script passing one of these options:

If you want to use the old commandline interface, you can do so by running

Run the script with --help option to show all available options.

The output of logging and the configuration file have moved to ~/.config/gpt. You may have to set your working directory again if you have used GPT before.

That'll do on Archlinux and derivates:

And that on Ubuntu:

The application can be installed by using setuptools. After downloading or cloning the repository run

Setuptools will also install a desktop file so you can launch GPT from the GNOME shell or menu. All alternative interface options are available via desktop action so you can start these on right click from the activities overview or dash if GPT is running or added as favourite. 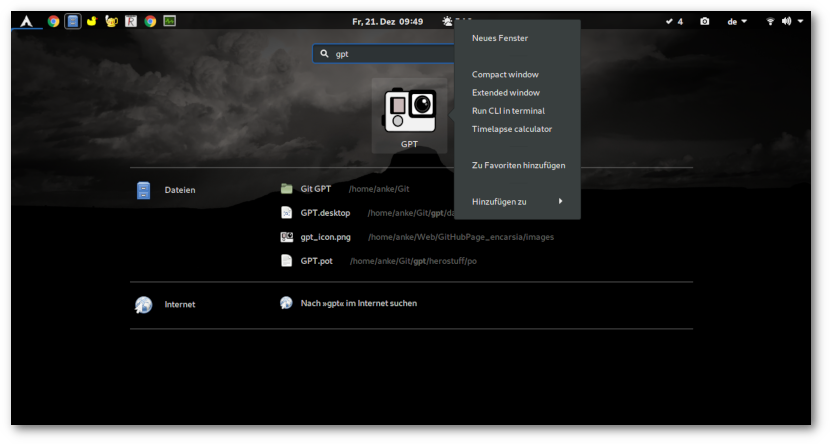 Consult the README for details.